After two years of working through various levels of phenomena, including alleged discarnate entities and denizens of the ‘astral realms’, a new source came through in 1994. Unlike previous contacts, the Cassiopaeans came through strong and clear, often delivering full paragraphs’ worth of complex material at one to two letters per second, with a high density of content and impeccable orthography. After telling Laura, “we are you in the future,” the C’s have been covering a wide range of topics by transmitting more than one million letters over the last twenty years, answering questions from practically all fields of knowledge, including physics, mathematics, psychology, para-psychology, philosophy, esotericism, history, sociology, politics, health, and astronomy. Where the material can be verified, the C’s have proven to have an amazing track record, especially when compared to the variable quality of most examples of channeling from the past 150 years.

For the first time in print, this volume includes complete transcripts of 36 experimental sessions conducted in 1994. Questions and answers have been annotated extensively, giving unprecedented insight into the background and interpersonal dynamics of the early Cassiopaea Experiment. The sessions of this year introduced many of the themes that would recur in more detail over the next twenty years, including such topics as cyclical cometary bombardment of the Earth, the solar companion hypothesis, ancient history, metaphysics, the hyperdimensional nature of reality, and the possibility of evolution of humanity. 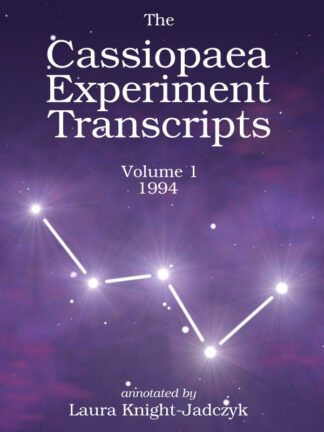