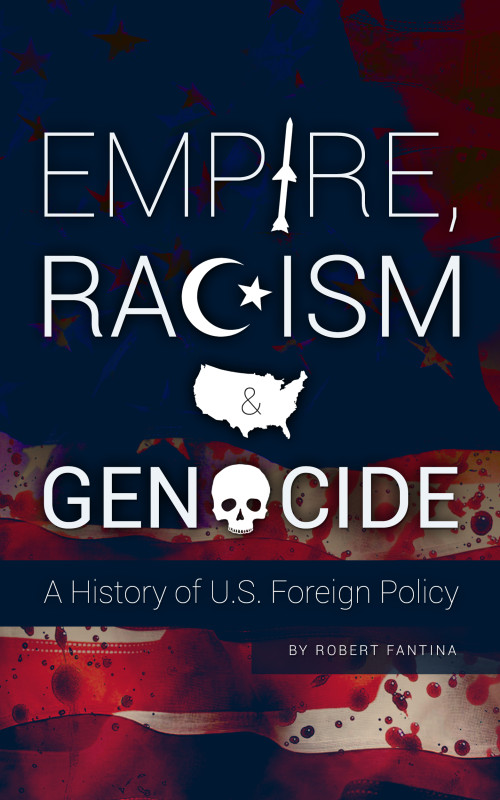 Empire, Racism and Genocide: A History of U.S. Foreign Policy

In its entire history, there has been very little time when the United States has been at peace. As it wages its many wars and ‘interventions’, the stated goal is always something few people could argue with: fostering democracy when a struggling people are resisting tyranny, removing threats to U.S. security, or punishing a cruel dictator for unspeakable misdeeds.

Yet on closer scrutiny, these reasons are seldom valid. They simply hide the true purposes of U.S. military involvement, which are power and wealth. Starting with the barbarous destruction of Native American culture in order to gain farmlands, right through to the Iraqi invasion for oil, money and power have always motivated U.S. foreign policy decisions. Dictators with appalling records of human rights violations are upheld by the U.S.  if they agree to whatever economic or strategic demands the U.S. makes. Conversely, democratically elected leaders are overthrown if they don’t.

Empire, Racism & Genocide: A History of U.S. Foreign Policy looks at U.S. history from shortly before the American Revolution, up to the present time, and details the U.S. government’s true motivations for its ongoing, deadly war machine.

“Having already published the most insightful and well-researched study we have of U.S. military desertion, and a powerful novel dramatizing the tragedy of participation in a U.S. war, Robert Fantina now brings us a comprehensive survey of the history of U.S. war-making.  This new book is as clear-eyed and unflinching as Fantina’s others.  It belongs in our classrooms and perhaps our doctors’ offices, where it might be prescribed as a cure for television viewing.” — David Swanson, best-selling author of War Is A Lie and other books

“We were sent to Iraq in 2003 and one of the tasks my unit had to search for the chem/bio weapons we were told were there. Everywhere we went, we found nothing. Sure, there were lots of standard munitions in warehouses and other places. But they were not my concern. I wasn’t worried about them.  Then we were tasked to guard oil wells along the route we were taking as we made our way north. We harassed a lot people who were doing nothing to us.

“Empire, Racism & Genocide: A History of U.S. Foreign Policy tells the true story of why the U.S. has been at war almost constantly from its inception to the present time. Lies I was told about the reasons for invading Iraq were only revisions of lies that had been told to soldiers and the citizenry from the War of 1812, through Vietnam, Afghanistan, Iraq and every other imperial misadventure the United States started. Additionally, the dehumanizing aspects of the U.S. military, from the time a soldier enters basic training to the time they leave service, are detailed. The book is an important addition to any realistic study of U.S. foreign policy.” — Kevin Benderman, 10-year veteran, war resister, peace activist