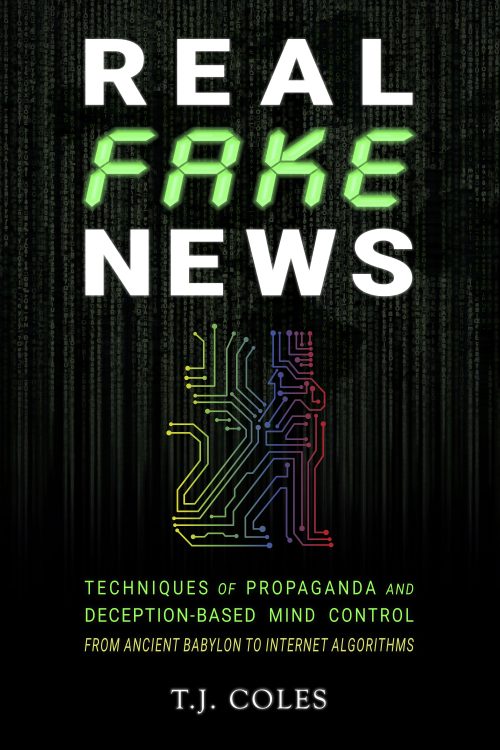 President Trump and his alternative media supporters call the mainstream fake news. The mainstream calls the alternative media fake. But who is telling the truth? What is fake news? And are there parameters to define it? Real Fake News gives the reader a broader historical and cultural context and encourages ultra-skepticism and critical thinking.

Techniques of Propaganda and Deception-based Mind Control, from Ancient Babylon to Internet Algorithms

Fake news is everywhere and always has been. From the earliest records of the complex societies of ancient Babylon, Egypt, Greece and Rome right up to the modern age of internet algorithms, people with power on all sides of the political and religious divide have told untruths, partial truths and outright lies in an effort to maintain and expand their power. Whether it’s simple money-making schemes online today (clickbait) or powerful political apparatus, including multimillion dollar parties, fake news is business as usual.

In Real Fake News, T.J. Coles (Britain’s Secret Wars) takes the reader on a journey, from the self- interested mysticism of ancient China and the atrocity propaganda of the British Empire, to the travelling medicine show quackery of 19th century America and the current abuse of authority by big pharma, the classic war photos which are actually staged and the online manipulation techniques of the secret services.

Al-Qaeda released fraudulent Bin Laden tapes. Islamic State does green-screen. The US accuses Syria of using chemical weapons with no evidence. Coles demonstrates that fake news isn’t confined to news media or to a simple ‘we’re right, you’re wrong’ dialectic. There’s plenty of ‘fake news’ in the alternative media as well as in the mainstream. This book gives the reader a broader historical and cultural context and encourages ultra-skepticism and critical thinking.

“Tim Coles has provided a great service. He has placed the controversy over “fake news” into a proper context. He rightly emphasises that it is not a new phenomenon; throughout history, it has been used as a weapon by governments, including the British, to manipulate public opinion. And he describes how it has been used by the mainstream media as well as social media. This is an important book which could not be more topical.”—Richard Norton-Taylor, author and former Guardian journalist

“Coles swiftly overturns popular conceptions of major ideological contemporary perspectives. This book is broad-based, very important, clearly written, common sense. It gets to the major issues on media and manipulation pretty much before anyone else.”—Dr. Matthew Alford author of The Writer with No Hands

EXCLUSIVE: How Elites Use Mainstream Media to ‘Maintain and Expand Their Power’ (Sputnik)