Comets and the Horns of Moses (Secret History Vol. 2)

Laura Knight-Jadczyk’s series, The Secret History of the World, is one of the most ambitious projects ever undertaken to provide a cogent, comprehensive account of humanity’s true history and place in the cosmos. Following the great unifying vision of the Stoic Posidonius, Laura weaves together the study of history, mythology, religion, psychology and physics, revealing a view of the world that is both rational and breathtaking in its all-encompassing scope. This second volume, Comets and the Horns of Moses (written in concert with several following volumes soon to be released) picks up the dangling threads of volume one with an analysis of the Biblical character of Moses — his possible true history and nature — and the cyclical nature of cosmic catastrophes in Earth’s history. xe88

Laura skillfully tracks the science of comets, revealing evidence for the fundamentally electrical and electromagnetic nature of these celestial bodies and how they have repeatedly wreaked havoc and destruction on our planet over the course of human history. Even more startling however, is the evidence that comets and cometary fragments have played a central role in the formation of human myth and legend and the very concept of a ‘god’. As she expertly navigates her way through the labyrinth of history, Laura uncovers the secret knowledge of comets that has been hidden in the great myths, ancient astronomy (and astrology) and the works of the Greek philosophers. Concluding with a look at the political and psychological implications of cyclical cometary catastrophes and what they portend for humanity today, Comets and the Horns of Moses is a marvel of original thought and keen detective work that will rock the foundations of your understanding of the world you live in, and no doubt ruffle the feathers of the many academics who still cling to an outdated and blinkered view of history. 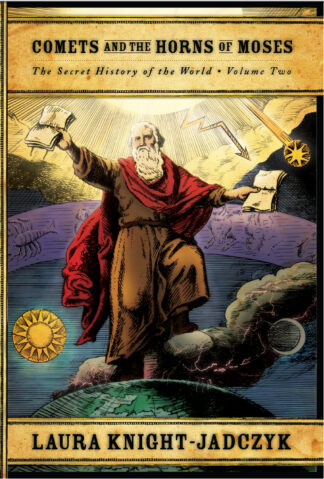